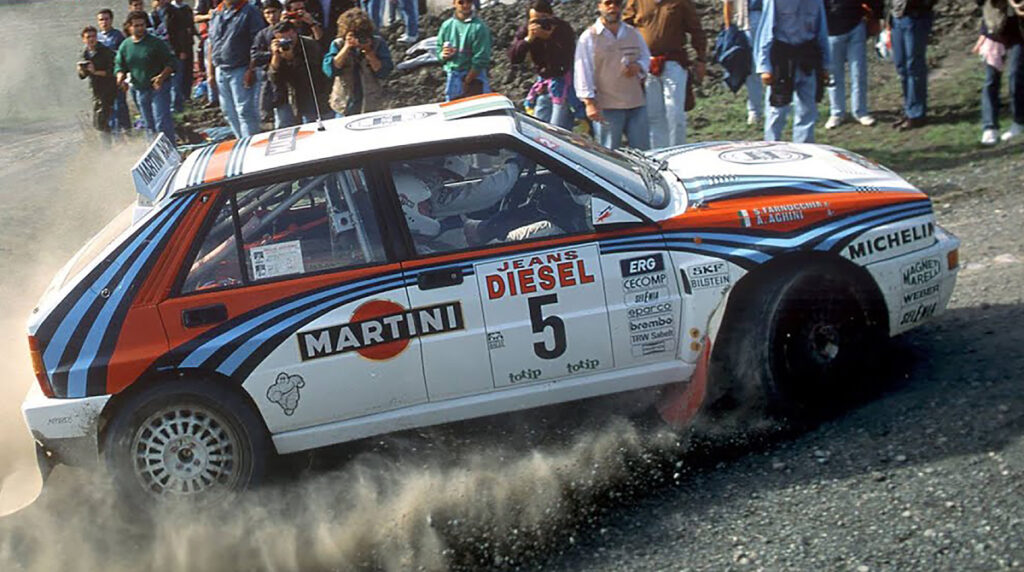 Do you know its history?
It is derived from the Delta HF 8v
The delta evolution stands out both in aesthetics and in the engine. it is rounded both in the sides and in the hood. the rear wing is almost vertical. looks ready for a special stage! it is not only aesthetic because compared to the previous version, steering, suspension and brakes have been improved. A more open drain. the 2.0 liter 1995 cc engine delivers 10hp more than the previous version.
It was the last Delta Martini to participate in the world rally in 1992. The news threatened to compromise the debut of the evo in the world championship. This is realized thanks to the Jolly Club and Martini Racing team. Obviously he won the world championship for the sixth consecutive time, with 8 victories. To date this record has not yet been equaled.
In 1992 Martini decided not to participate as an official sponsor. The liveries are marked Martini are two, what distinguishes them are the sponsors.
The Martini version won the Sanremo Rally, driven by Andrea Aghini and co-driver Sauro Farnocchia, valid as an Italian rally, and has the classic martini logos on the roof, bonnet, tailgate and rear side doors.
The Sportline version is distinguished by the presence of the “Sportline Martini” brand which was the Martini clothing line. He won the Monte Carlo Rallye with Auriol Didier and Occelli Bernard on board.

We have replicated this livery available for purchase here so that we can offer it to all Delta owners to relive the good times.